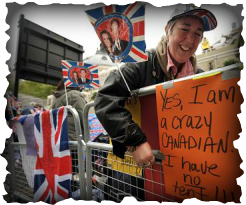 Drumming up publicity at the Royal Wedding.
Martha's Vine: the sequel, Martha's Mirror,  is now on Amazon.com.
Check out the activity on Martha's Vine Facebook group.
And check here for a recent story on the book launch. Thanks to Scott Hayes.

I took time out to go to the royal wedding. Below is a little glimpse of the excitement. I went to experience the romantic event of the century, and to do a little promotion for Martha's Vine. I had no idea that I would go global in 4 hours. It was fabulous.

Sleeping on the streets was very cold (yes, I slept on the cobblestones across the street from Westminster Abbey). Earned myself the nickname, "Crazy Canadian," because I decided to stay with nothing except a tiny little collapsible camp stool. Luckily, an angel from God came along with a ReadyBed...an air mattress attached to a sleeping bag. It was truly a blessing.


If you want to do something for fun, Google my name along with the words, "royal wedding" or "romance novelist." Amazing results.

In my royal sleeping bag...
On Canada.com...
A few choice words...
In Senior's World...
On CityTV news...
The Montreal Gazette...
The China Daily...
The Star.com...
Smiling on CTV...
Quoted on IBN
Sleeping on the streets of London

My special thanks to all those who supported me, cheered for me, and sent my their good wishes while I embarked on my wild wedding adventure. And a big BOOOOOOOOOO to the nasty British woman who told me that she had more of a right to be on the sidewalk than did I, because "it was her county." I am not kidding. That's what she said.

Aw, well... check out the wedding video below...it really was a lot of fun...whether or not you are a royal watcher.