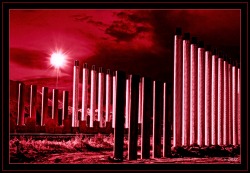 The woman winced as her husband shoved the small gun into her hand. The Browning pistol lay across her right palm—a vile thing, evil in its silence. Her chest squeezed tight as a memory bubbled up. She struggled to take a breath. She fought the rising emotions, but still her hand shook. Engines roared in the distance. She glanced over her shoulder and then she looked up at her husband.

“Josef—I can't.” Martha rid herself of the gun by placing it gingerly on their tiny kitchen table. Her ice blue eyes pleaded for him to understand. “I just can't.”

“This is ridiculous,” Josef said. “They'll kill us if we don't fight back.”

“We can't fight them,” Martha said. “We're too few.” She waved her arm toward the living room where people sat on bench seats. It was an assortment of men, women, and children–some old, some young, some very young. “What're you thinking, Josef? We're not an army.”

The growl of engines droned in the distance.

Josef shifted his gaze. Martha followed his lead and looked out the window of their RV. She couldn't see the motorcycles yet, but she knew they would be there soon. She knew who was riding. She knew why they were coming. And she knew what would happen if they were caught.

“We could die here,” she said. She took Josef's face in her hands and turned it towards her. “Or we could run. And live.”

Josef’s eyes darted past his wife’s head to the window.

“Drive where?” Josef asked. He was looking at her again. “Drive to where?” He held his hands up in frustration.

“To the place we heard about,” Martha said quickly. “That camp outside Edmonton. Near the Hutterites’ colony.”

“Josef—it's our only chance.” Martha grabbed her own face, her fingers splayed across her cheeks. The rest of the family watched the exchange and waited in silence. The engines got louder. Martha raised her hands into the air, fingers fanned. Her eyes were wide. “We can’t do this on our own anymore. We need to join with other people.” She took a breath. “We've got to go. Now!”

Josef stood silent and then he nodded.

Martha raced to the front of the RV and settled in behind the steering wheel. The family members took their usual seats. They knew the routine. They had been following it for over a year–ever since the Change.

TheChange is what people called the phenomenon that had altered their world. The power grid went down. It just disappeared. Without warning. It just happened. In an instant. Overnight. They went to bed with electricity; when they woke up, there was none.

Nobody understood what had happened. They simply adapted. Or died; millions had died. But not Martha. And not her family members. She had made the decision to survive—and to keep her children, and her grandchildren safe, too. They had learned to trust her. They trusted her now. No one spoke.

Martha glanced back, smiled, and turned the key in the ignition. The unit fired up. She shoved it into gear. She glanced at Josef. He stared straight ahead.

Martha swung the huge vehicle onto the pavement. A shower of dead, rust-colored leaves burst into the air and danced in the RV's jet stream. She pressed down on the gas pedal.

Out of the corner of her eye, she could see Josef mumbling and she knew he was praying, too.

She stepped down harder on the accelerator and the RV picked up speed. Motorcycles droned on the highway behind them.

I can do this.

I can do this.

The speedometer needle leapt to the right as the RV roared up the highway.

THE MAN'S message arrived by “hog.” Not the fat-bellied, curly-tailed, pink, rooting-around-in-the-mud type of hog, but rather the kind built of steel and rubber, complete with two wheels, handlebars, a muffler, and… an attitude. The Man's message rolled from the Pacific to the Atlantic, and then dipped south toward the Gulf of Mexico in a relay that ran day and night, rain or shine. From hog rider to hog rider, the message passed; it took months, but thousands of bikers soon heard the news, and they embraced it—for doing so meant survival. But more than that, it meant—domination. And so, they came . . .

Like birds of prey, they flew to The Man, to be near him, and to follow his commands. He was The Man. His message was clear. The Man was rallying the clubs together. He was building an army. They would move north to Canada where border resistance, since the Change, had collapsed.

Motorcycles—thousands of bikes—rumbled across the US-Canada border through the Sweet Grass-Coutts border crossing: Harley-Davidson, Honda, Triumph, Yamaha, Kawasaki, Suzuki, Ducati, and vintage Indians—all shapes, all engine sizes, all colors—as colorful as the wild flowers carpeting the fields and the ditches. The bikes cruised by like a motorcade or a parade, but no watchers stood on the sidelines, welcoming them or cheering them on.

Nobody stopped the bikers—there was nobody to stop them. The Canadian border guards, the RCMP, and the military had long since deserted their posts because staying would have meant death: starvation or being shot. Now, the border between the two countries was a wide avenue leading into the Alberta heartland, a land rich with resources: beef, grain, honey, fresh mountain water, and—more importantly—oil. And, guns—Albertans loved their guns. And their ammunition. For the bikers, it was like riding into a province-sized Walmart. Currency? Bullets, hot from a gun barrel. But only if an owner wouldn't see reason—The Man's reason—and comply. They had the choice. However, most people didn't resist The Man. Because he made things happen.

The Man was unmovable, unshakeable, and unstoppable. Small biker gangs, small car gangs, and even small towns rose up before him, but they were soon converted to his way of thinking: acquiesce or die. His northern route through the province was easy to trace—a smeared trail of blood. But it wasn’t to be all smooth sailing because The Man hadn’t reckoned on the one they called, the ‘Gatekeeper’.

JUST OUTSIDE Edmonton, the Gatekeeper had been strategizing and implementing his plans for many years. Matthew was ready when the Change hit.

When the electricity disappeared, Matthew switched over to generators. His survival compound had been designed intelligently—more like a fortress. They had everything necessary: guns, ammunition, food, shelter, manpower, and a powerful alliance with one of the largest Hutterite colonies in the province.

Matthew and his longtime hunter buddies—six of them—had turned survival into an art form. It had taken them years to complete their compound and amass the goods in their storehouses and bunkers, but they had done it. They were comfortable, except for one thing—so many others wanted what they had. So many were willing to kill for what they had. Especially the “Crazies.”

The Crazies, biker bands, modern day pirates with no law to control them, embraced and flaunted their freedom—their freedom to take, to destroy, and to kill. Word-of-mouth about Matthew's compound had reached the bikers. The attack came quickly. Without warning. And it had been deadly; Matthew’s friends had died in the ambush.

However, the Crazies were just that—crazy—an eclectic mix of men and their motorcycles. Wild and willful, but poorly organized; their lack of leadership made them weak. And they knew it. So, when they got wind of The Man and his plan, they were intrigued. They, too, like their American counterparts, flocked to him. Some out of a sense of survival. Some out of a desperate need to belong. Some out of curiosity. Some out of a carnivorous craving for confrontation, and with an eagerness to test the supremacy of the self-proclaimed biker king. Whatever their reason, they arrived—by the thousands. All were headed for a small Alberta town called Vulcan, situated halfway between Lethbridge and Calgary.

Meanwhile, Matthew endured the memory of his friends' deaths, but his resolve was clear: The ‘Gatekeeper’ would never be beaten by the Crazies again.

It would take a woman to do that.

And she was on her way.